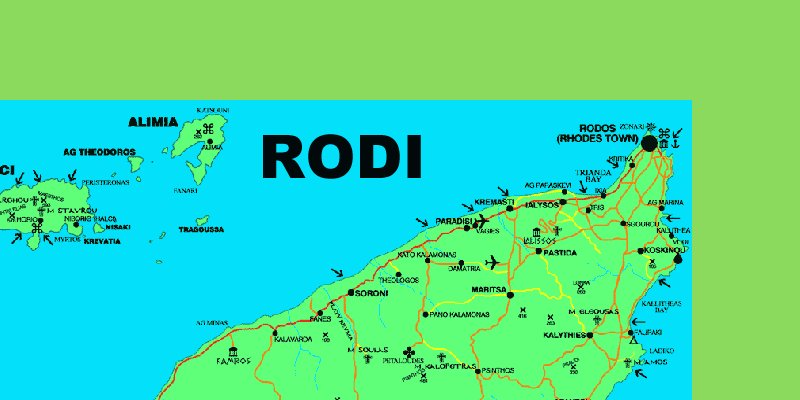 All you need to know before leaving

Have you decided to spend your holidays in Rhodes? Good choice. At this point all that is left is to prepare. Pack your bags. Arrange the documents that must be brought. Inquire about the trip. Make a small guide on what you will wish to visit once you arrive to the Aegean island. But let’s start from the beginning.

The island of Rhodes can be reached by ship or by plane. There are practically countless possibilities, to the point that everyone can create a journey in his own image and in his likeness. By ship from the UK there are no direct connections to the island of Rhodes, for example, and this can also become a perfect opportunity to organize a sea trip among the wonders of the Mediterranean. The main ferries to Rhodes leave from the port of Piraeus, which in turn is connected to Patras. The journey with the ordinary ferry, departing from Piraeus for Rhodes, lasts approximately 16 hours. Inquire with the navigation companies that provide services to and from the island of Rhodes. The easiest and most convenient means of transport, from the UK, is of course the plane: the flight lasts about two and a half hours, and especially in high season there is availability of direct connections. If you choose to travel by plane, you can arrive, whatever the airport of departure is (and there are many that from the UK, with many airlines, leaving for Rhodes), at the Diagoras airport, which is 14 kilometers far from historical center of the town of Rhodes, in the locality of Paradisi, in the eastern part of the island.

WHEN TO GO TO RHODES

When to go, of course, it depends on you. What is to know is that in Rhodes it is full summer basically from May to September. The busiest months are obviously July and August, during which the warm and dry climate of the island attracts the majority of tourists and visitors, from Italy but not only. If you decide to go to Rhodes in high season (July or August) our advice is to book early. In May, June and September it is always summer, the climate is definitely pleasant, beaches and sea are always at your disposal, but without the crowds and chaos of July and August.

Rhodes offers tourists and visitors a huge number of accommodation facilities. For all tastes and for all budgets. From luxury hotels to hostels, frequented especially by young people, to campsites (classified in A, B and C), villages and the most comfortable b & bs: the offer is certainly able to satisfy every need, including apartments. In Greece free camping is not allowed.

THE HISTORY OF RHODES

Perhaps the first thing that comes to mind, thinking of Rhodes, is the colossus, one of the seven wonders of the world. Unfortunately of the colossus of Rhodes, which was a giant more than 30 meters tall, there is practically nothing left today. But on the island there are many other treasures of art, history and nature to visit and discover. According to Greek mythology Rhodes was born from the union of three cities founded by the grandchildren of Elio and the wife of Rhodes. As a true maritime power, thanks to its geographical position, it controls the routes between the West and the East. In 305 BC Rhodes is besieged by Demetrius Poliorcete, king of Macedonia, successor of Alexander the Great. When Demetrio retreated, the inhabitants of Rhodes decide to erect a statue of the god Helios: that is how the Colossus is born, one of the seven wonders of the world, but it will collapse 66 years later due to a devastating earthquake. In the eleventh and twelfth century, again because of its position, Rhodes became the first defense of Christianity against the advance of the Ottoman Empire. After that, the island passes from Byzantium to Genoa, to the Knights of St. John of Jerusalem. The city was rebuilt as an ideal model of a medieval European city. Until 1522, when it was forced to surrender to the army of Suleiman the Magnificent. In 1912 the Turks handed it over to Italy, until in 1948, after the Treaty of Paris, the island became part of Greece.

THE ISLAND OF RHODES

Once you arrive to the island, you will be spoiled for choice. Make a detailed plan, or improvise, depending on the day and the mood. In one case or another, you will have many things to see. In the Upper Town, for example, there is the Archaeological Museum, an ancient Gothic building in Moussiou Square, which housed the hospital of the Knights of St. John in 1522. The single cells where the beds of the sick people were, are still visible today. In the hall at the back of the courtyard there is a beautiful mosaic. Or the Palace of the Great Masters or the Knights, fortress of the fourteenth century, which houses precious mosaics of Kos and Japanese vases. The Ramparts can be visited every Tuesday and every Saturday at 2.45 pm starting from the Knights Hospital. The Byzantine Museum is located opposite the archaeological museum: you can admire beautiful icons of the V-XVIII centuries. In the Lower Town, in the Nestoridis villa, in Haritos square, is the Museum of Modern Greek Art: in the three exhibition floors you can admire the 1000 works of the Ioannou collection. We are represented by the greatest Greek artists of the twentieth century, belonging to the most significant artistic currents of our time (for example Yannis Gaitis, Yannis Tsarouchis, Konstantinos Maléas). Among the historical and architectural wonders to visit on the island of Rhodes you can not forget the Acropolis, which rises up in the western part of the city, on the top of the hill dedicated to Aghios Stephanos, and renamed Smith Mountain over the centuries, from where dominates the entire capital of the island. Or the city of Lindos, with its Temple of Minerva Lindia, one of the most beautiful places on the island. The Acropolis of Ancient Lindos was built on a steep 116 meter high rock, and is like a huge natural balcony overlooking the archipelago. Unmissable, then, the Valley of the Butterflies, a unique wonder of nature.

But if you chose to spend your holidays in Rhodes, what is right for you are the many beaches at your disposal. From the most famous and crowded, especially during the peak months of July and August (to note the famous Anthony Quinn bay, well-known by the famous Hollywood actor) to those that are perfect for rest and relax. Not to mention the crystal clear sea, where you can have fun with long swims offshore, or snorkeling and diving. The southern part of the island, however, thanks to its winds that blow impetuous, is ideal for surfing and sailing lovers. A little more attention is needed regarding diving. The sea is inviting, we know, but scuba diving is allowed only with authorized schools or with permission from the Port Authorities and only in some areas.

But when you are in Rhodes, you can also “get lost” in long walks across the city streets and the characteristic markets (there are many, almost every day) in which to breathe the atmosphere of the past. Or enter the characteristic places and taste some of the local specialties: you can taste an ouzo with some mezés in the warm atmosphere of some old tavern. And the evening? During the summer, in the busiest months, the island lights up: the clubs in the city, in the small villages, on the beach, come alive with music and dancing, attracting boys and girls from half of Europe. For those looking for something more intimate, the old taverns still linked to the traditions are ready to welcome you, making you plunge into the history and the typical customs of Greece. During the summer then the program of events, parties and events is very rich. Concerts of classical music, rock, painting exhibitions, cinema under the stars and theatrical performances alternate in squares and clubs. In short, if there is one certain thing of your trip to Rhodes, it is: whatever you are going to do, you will not get bored.

USEFUL DOCUMENTS FOR THE JOURNEY

Before each trip, you need to know which documents are needed. In this case Greece is part of the EU and adheres to the Schengen agreement, so you identity card is enough (better if valid for expatriation, even if technically it would not be necessary) or a valid passport. Attention: the driving license is not considered an identity document. Better if minors also have an individual document. It is also advisable to always have a photocopy of your identity document with you. Remember your health card.

You never know, it’s always better to be foresight. In Greece the public health facilities are average crowded, but obviously in the summer they are much more, especially in the islands. Obviously European citizens can receive all necessary medical care provided by local public health care, if they have the European Health Insurance Card (the plastic health card). Do not forget it. Concerning the time, Greece is two hours ahead UK. The currency that is used is obviously the euro.

How to move. Beware of the roads, which could not always have an optimal maintenance. If you want to move on the island you can easily rent both cars and motorcycles. It should be noted that in Greece in order to drive a 50 cc motorcycles, under 125cc and maximum power 11kw, the specific driving license (category A) is required. The same other traffic regulations of the other European countries are valid. The speed limits are 50 kilometers per hour in residential areas, 80 on the provincial roads, 100 on the state roads, 120 on highways. The green card (which allows you to be insured abroad for the Civil Liability) is not required in EU countries. On the island there is obviously also a public transport system, which connects the city of Rhodes and all the most famous and tourist places on the island.